Along with Lithuania’s growth and integration into the European Union, the city has been making a successful transition into a commercial centre. The name of Šiauliai was mentioned in the chronicles of Livonian Order after Lithuanians defeated the army of crusaders during the battle that took place near Šiauliai on 23 September 1236. The history of Šiauliai is long and quite often unpleasant – the town has often been devastated during several wars. However nowadays the town covering an area of 81 sq. km has become the fourth largest town in Lithuania both by area and population.

Šiauliai has been a very important transportation terminal since the 15th century. This advantage gives opportunities to develop the city and the surrounding area with the priority of transport development not only in Lithuania, but also Central, Western and Eastern Europe. 5 ice-free harbours of the Baltic Sea are situated about 100-200 kilometres from the city, moreover it is on the Via Hanseatica highway (Berlin – Kaliningrad – Saint Petersburg) and connected through the highway A9 to the Via Baltica highway (Helsinki – Tallinn- Riga – Warsaw). The city has direct connection and easy access to the largest railway junction in the Baltic’s and the European Union prioritised rail transport corridor. There is an airport within the territory of Šiauliai City.

The population of Šiauliai is 129 thousand inhabitants. The people with their experience in electronics, metal processing, construction and other industry branches remain the city’s greatest asset. As at the beginning of 2006 the unemployment rate in Šiauliai reached 2 percent.

Šiauliai has old traditions of manufacture and trade stretching back to the 13th century. Traditional business such as leather, timber and furniture processing, electronic and household technology and transportation means, manufacturing of plastic and metal products are being developed in the city. The city is proud of TV sets, bicycles, leather articles, machine tools, knitwear, non-woven materials. The successful development of confectioneries, brewery implies hope for the economic revival of the city.

Šiauliai City is also a centre of culture and science – Šiauliai University – was opened in 1997. Besides the University there are a Music Conservatoire, 3 Colleges, Šiauliai Vocational Education and Training Centre in the city.

Šiauliai is one of the major cultural centres in Lithuania. Professional art companies and single performers make the town famous. Both residents of Šiauliai and visiting guests may sweep into the vortex of the intensive cultural life, which is full of original events.

Sports are given due attention in Šiauliai and thus many of the sporting events have become traditional.

The Municipality of Šiauliai seeks to foster actively business connections and therefore co-operation through town twinning is intensive and diverse. The municipality has so far signed twinning agreements with 10 cities: both form Eastern, Western Europe and the USA as well. Since 1994 the city is also a member of the Union of the Baltic Cities.

The growth of tourism provides favourable conditions for the creation of new job places. Municipality of the City of Siauliai promotes the development of this sector. A Tourism Information Centre is operating successfully.

Intergration process into the European Union has encouraged the city development. The European Union has oppened broad possibilities for the cities to realize their expectations and endeavours. The EU funds make the residents dream true: to construct the Sports and Entertainment Center, to clean up the lake Talša, to build streets and new cycling tracks.

Global practice proves that investments need favourable conditions. This is exactly what Šiauliai may proudly offer: advantageous geographical location and a qualified labour force. The city may also offer empty facilities ideally suited for any kind of production or plots of land for those wishing to construct new premises.

It is also of utmost importance to create a favourable business climate. This includes providing the related information, tax system, unambiguous legislation, competence of the personnel in charge of negotiations, and this what Šiauliai is glad to offer. 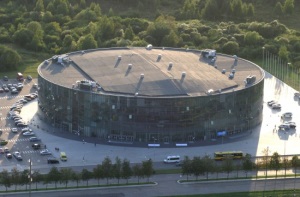